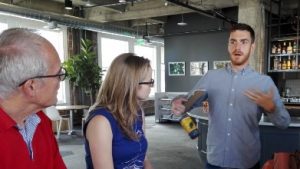 Holacracy has gained a lot of attention recently as a possible approach to run a company on the principles of self-organization. We had the opportunity to speak with organizational designer Jennifer Dennard from Medium about the experiences they made when operating under the system of Holacracy – and about the development taking place at Medium now, after having decided not to use Holacracy any longer.

Medium is an online blogging platform for amateur as well as professional people and publications. It was developed by Twitter co-founder Evan Williams and launched in 2012. Its mission is “to create more thoughtful engagement online and to offer value to writers as well as to readers of the articles published” (Jennifer Dennard). It does so by providing an online tool for writers and the possibility to share articles and also to comment on them

Holacracy – before and after

When hearing about Jennifer’s experiences with Holacracy, it becomes clear that using Holacracy for a certain amount of time and then going into a different direction, is not being observed as a fail within the organization. In fact, a lot of learnings have been drawn from operating under Holacracy at Medium – especially the level of individual empowerment as well as the forming and maintaining of certain teams to tackle different tasks have been perceived as beneficial for the organization. Among other points, the decision not to operate under Holacracy anymore was made as major concerns about the complex system with its very special terminology arose and pain points occurred that also affected the recruiting process. As Jennifer put it: “We did not move away from Holacracy, we wanted to move beyond it.”

Since then, constant change and further development of the team structures and processes have been in place at Medium – especially ideas from the team-of-teams approach have been adopted to the system that still incorporates ideas of Holacracy. New roles have been created to provide for the support of people (people manager) and to guarantee for a steady and smooth workflow on the other hand (work manager). So called “initiatives” are formed around a certain area of work that has to be done.

Currently, Medium faces challenges with regards to the further development of the coordination of different initiatives arising and also with a view to the question of resource allocation between different initiatives. As Medium has already proven a huge amount of willingness to experiment, learn and develop, we are already excited to learn more about how the company is going to tackle these challenges and grow further.