How to Explain Six Sigma by Using the Profit Triangle

Once a person becomes a Master Black Belt or deployment leader within an organization, they may spend a lot of time explaining to other people what Six Sigma is and how it can help the company. They may have to convince many skeptical people, who always see the deployment costs but not the benefits. Two things must be clearly understood before trying to explain Six Sigma to anyone.

Financial savings is a key objective of Six Sigma. While this should be fairly straightforward, it is not always clear up front what the (hard) savings will be. Finding the true costs of poor quality can be a difficult job. For example, if a project is aimed at improving the throughput of a certain machine or process, but the current demand is lacking, then there will be no hard savings. However, if the demand is 20 percent above budget and the project team can improve the throughput, this could mean a significant profit increase.

Another difficulty in finding the true costs of poor quality is that when working on the main problem, sometimes a variety of smaller costs and issues are resolved as well. Usually those issues are not listed when the financial analysis is being made. In most successful projects, one improvement affects another. For instance, improving productivity may boost morale and decrease material costs.

The focus on savings can be made even more difficult when company controllers are afraid to be held accountable for the savings and lack the operational skills to see the benefits.

In addition to achieving financial savings, Six Sigma is a program that helps improve the total business process. Six Sigma is not a group of internal consultants (Black Belts) available to fix processes when they are broken. Six Sigma should evolve in a structured continuous improvement program in which everybody has a place and a clear goal.

With this background, the question remains: “How do you explain Six Sigma to colleagues?” 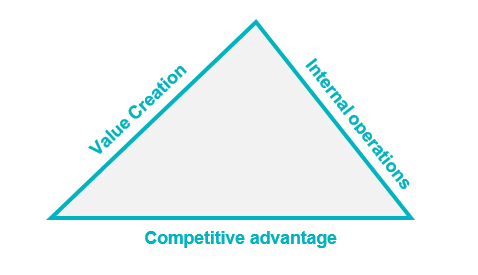 A tool called the profit triangle can help clearly describe Six Sigma’s role in the organization. It focuses on both continuous business improvement and financial savings. Often used in marketing theory, the profit triangle simply shows what a company needs to deliver to its customers to make a profit.

All Sides of the Profit Triangle

The three sides of the profit triangle are value creation, internal operations and competitive advantage. All are important for a company to be profitable. An organization must excel in all three areas if it wants to be among the best in class. Like a triangle, all three aspects are linked – a company’s performance on one side will have an impact on the other sides. If its internal operations are not well structured, a company will find it difficult to create value and be highly competitive. Six Sigma began as a focus on improving internal operations. The methodology is targeted on the processes within an organization.

Six Sigma and its tools are not limited to production processes. Sales, marketing, and research and development departments also are filled with processes that can be improved. While a company might have a natural competitive advantage because its competitors have such poor products or sales efforts, in today’s marketplace this is unlikely. Therefore, organizations need to excel in all areas.

Operational excellence is the goal – Six Sigma is a means to that goal. And the profit triangle can help explain Six Sigma’s role.