Exponential Organizations – disruptions like Uber, AirBnB and other unicorns 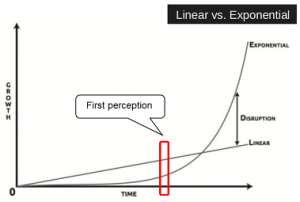 Uber is already running 50 % of ground transportation in the USA, AirBnB has 500,000 stayings per day. That’s something nobody would have expected 5 years ago. It’s all about exponential growth which could make this happen. Last year researchers from Singularity University wrote the most fascinating business book since years. Many technologies according to Moore’s Law will disrupt industries we couldn’t think about. Kodak will not be the only case where market leaders will be thrown out of business in short time. The crucial factor about an exponential organization is that growing from 0.02 to 0.04 in a quarter is beyond attention but following the doubling path for 5 years you end up at 209715.

The Logic behind an Exponential Organization (ExO)

We’re moving from a *scarcity* economy to an *abundance* economy. That moves us from ownership to access. This causes a systemic transformation of business models. We’re not using 15 year old phones, are we? So why use century-old models of organizations? Exponential organizations are 10 times more successful than their competitors – they are faster and more efficient in emerging business opportunities. As software eats the world, nearly every company becomes a software company. We’re becoming fully digital organizations

What drives ExOs is the ambition to create a better world and by this changing an industry dramatically. Examples for an MTP are “We organize the world’s information” (Google) or “We want to make a better living for one million people” (Singularity).Talking to ExO consultant Josh Camire the 10 aspects of an ExO are not 100 % needed to be 10 times better than the industry. But at least 5 of 10 elements have to be strongly embedded in the business model and culture. More about the what’s meant with Interfaces, Dashboards, Autonomy, Community and crowd etc. could be found in Salims book or explained in his super thrilling video. 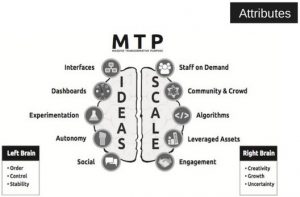 How to become an ExO?

For all experts we talked to one point was clear: You cannot easily transform a company based on traditional business models, millions of assets and hierarchical organization into an ExO. What we learned was that those who manage to reinvent themselves or even disrupt parts of their business will have higher chances to be part of the survivors and not end up like Kodak. There are multiple paths to renew the operating systems in some of the 10 aspects: some start with building new ventures outside their existing core business, some begin the journey with Rapid Results initiatives to vitalize the core business and many just try to establish agile working principles to experiment with new ways of working.